The holy month of Ramadan has begun for practising Muslims around the world.  It is a celebration of the first revelation of the Quran to the Prophet Muhammad (Peace Be Upon Him) by the Archangel Gabriel in a cave called Jabal an-Nour near Mecca.

Ramadan is observed in many ways, but most notably by adhering to two of the Five Pillars of Islam.  In addition to prayer, the majority of Muslims fast during Ramadan from dawn to dusk.  Ramadan is also marked by zakat, charitable giving.

Artistic depiction of the human form is forbidden in Islamic art.  It is considered a form of idolatry and a sin.  Although there are some examples historically, it is rare and generally deemed disrespectful.  Therefore, a majority of Islamic art is geometric forms and calligraphy.

This piece is by an Egyptian artist named Nora Al-Galad.  You can find more of her work here:  Nora al-Galad

I love how this calligraphy has a bit of a modern flare.  The flowers and leaves are unusual for Islamic calligraphy.  Usually one would use more geometric pattern, not something from nature.  This artist uses flowers in the forefront, but also uses them in the background in a more traditional, repeating pattern way.

Regardless of your religious or philosophical views, the world could use a lot more charity.  My first charitable act to the world is to not fast.  It would be bad, trust me.  But I do intend to make a conscious effort to be more giving and more forgiving this month, and I encourage you to do the same.

Ramadan kareem (have a generous Ramadan)! 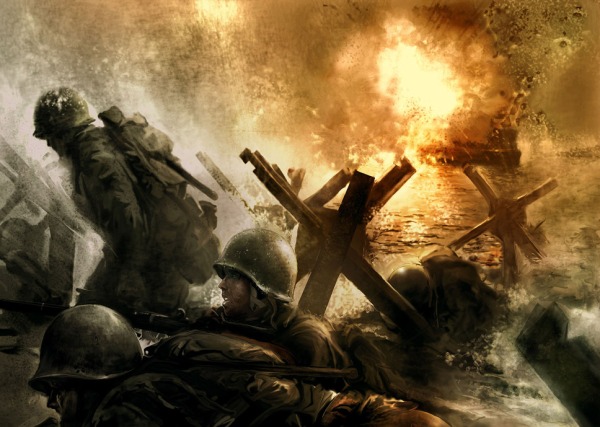 Today we remember D-Day, the invasion of Normandy by the Allied Forces in 1944.  There is so much information to learn about D-Day, I won’t even bother to delve into it.  There are thousands of books that will be much more informative than I could ever be.

However, I will say that I find the logistics behind D-Day fascinating.  The engineering feats that had to be accomplished just to get the guys to the beaches as safely as possible are really incredible.  Here is a really short list of some interesting innovations: D-Day Innovations.

Mariusz Kosik is a Polish artist that specializes in military battle art.  He’s also a historian and strives for complete historical accuracy.  This endears him to me, as historical inaccuracy drives me nuts.  He has even done illustrations for Osprey Publishing, the premiere military history book publisher.

Honestly, I had some difficulty finding out information about the artist in English.  I believe a lot was lost in translation.  But I really didn’t need to read Polish to see just how amazing he is.  I strongly suggest you check out the artist’s webpage at Mariusz Kozik.  He has some amazing oil and digital paintings with an incredible amount of detail.

My favorite part of this digital painting is actually the Czech Hedgehogs.  Those are the big X type things you see in the water.  These were huge obstacles placed in the water by the Germans made to slow down or destroy boats coming to shore.  They were designed to be concealed underwater during high tide, as it was believed that would be the only time anyone would attempt an invasion.  They were wrong, the invasion began three hours after low tide.

Check out this cool article about the science behind the landing here:  Science.

Thank you to everyone that stormed those beaches on that day, not just Americans, but the Canadians and British as well.  We also remember the brave men and women of the French Resistance, as well as those of all nationalities that supported the cause.  And of course, we remember the Army and Navy nurses, many arriving as early as D+4.