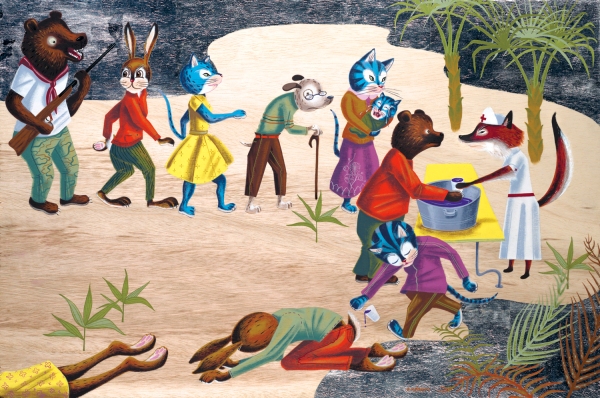 On this day in 1978, November 18, over 900 people died of cyanide poisoning administered in an act of “revolutionary suicide.”  Many were under duress.  304 were minors.  None were given a choice.  Today is the anniversary of the Jonestown Massacre at the Peoples Temple in Guyana.

Jim Jones considered himself an “apostolic socialist.”  After meeting criticism in Indianapolis he moved to San Francisco.  There, he gained public and political support. In 1976 he moved his cult to the English-speaking but far left leaning Guyana.  “Jonestown” was billed as a “socialist paradise.”  The Peoples Temple Agricultural Project was formed.

Paradise it was not.  The members were required to work long hours of hard manual labor as the soil was poor.  There wasn’t easy access to clean water.  Days were spent working, watching and listening to communist propaganda, and listening to a near constant broadcast of Jim Jones himself over the town’s speakers.  And you could not leave.

As family members and friends back in the States got more and more worried, an investigation was launched.  Senator Leo Ryan led a group of his staff, media, and members of a concerned relatives group.  After days of negotiation, Senator Ryan was set to return to the States. He stated that his report would be mostly positive.  However, he had with him 14 defectors.

The health and particularly mental health of Jim Jones had declined.  This investigation and the defection of his followers sent him down an even more dangerous, but probably inevitable path.  As he was apt to record himself, the “death tape” details what next transpired.  One of the “defectors” was a plant.  Senator Ryan and four others were killed.  Nine others were wounded on the airstrip.  There was no chance for Jonestown now.  No one would survive.

In addition to those five killed at the airstrip, 909 died at Jonestown– two by gunshot wound, the rest by ingesting a combination of Flavor Aid and cyanide.  I am opting to not describe the acts of adults toward children or any other further description.   The details are disturbing.  You can listen to the tape and hear the adults talking calmly while children scream.  I don’t need to describe it to you, you can look that up.

This painting by American artist and illustrator Andrew Brandou is so creepily haunting.  It’s part of a series entitled “As a Man Thinketh, So He Is,” which depict several different scenes at Jonestown before the massacre.  You can see the entire collection here.  As a Man Thinketh.

Brandou paints in a style similar to old children’s books.  They remind me a lot of the Little Golden Books, which I think is partly why I find them disturbing, but somehow beautiful at the same time.  This painting, Medication, shows a variety of animals queuing up peacefully to their death.  I think this is an illusion to Jim Jones’s so-called “rainbow family” and his integrationalist ideals.

A mother cat with a screaming kitten, an elderly dog glancing nervously at the already fallen bodies of his comrades, a vixen nurse looking determined to complete her job.  A hare looks behind him to a bear with a gun.  The bear seems to be the only one smiling.  Interestingly, Jim Jones himself isn’t present in this painting, as he is represented as a lion in the rest of the series.  Possibly an acknowledgment that he himself didn’t die of poison, but an apparent self-inflicted gunshot wound.

One has to wonder if this could still happen today in this world of constant communication.  But then I think about all those that blindly follow what a talking head tells them, regardless of the absurdity or improbability or down right immorality.  There may never be another day when so many people physically drink the proverbial Kool-aid, but people drink in poison every day.  Turn off the constant propaganda being broadcast non-stop.  We don’t have to listen to that voice.

Learn more about the artists of Jonestown here:  Jonestown Art