The story of the Magi, the Three Kings, the Wise men, however you know them, it’s one of my favorite Biblical stories.  I love the mystery of who they were, where they were coming from, and where they went after they saw baby Jesus.  Matthew says “they returned to their country by another route” in order to avoid King Herod.  But where was “their country?”

Most Western Protestants and Catholics follow the tradition of three Magi, although some traditions say there were up to 12.  Traditionally, there are three men, Melchior of Persia, Casper of India, China, or “the Orient”, and Balthazar the African Wiseman, possibly from Ethiopia.  They are known by different names and countries in different traditions.

I’ve always had this nagging question no one seems to have a good answer for.  What would three men of such different ages (traditionally 20, 40, and 60) from incredibly different backgrounds be traveling together for?  Some traditions even suggest Balthazar was Muslim.

I think it seems more likely that all three were Zoroastrian.  This would probably explain not only why the three were traveling together, but also the use of the term “magi.”  Although it was also associated with magicians, alchemists, and astrologers, it was also commonly used to describe followers of Zoroaster.  (A people I hope to expand on in a later blog.)

The Magi brought gifts of gold, frankincense, and myrrh, which are another mystery.  Who gives a baby incense and embalming oil?  Of course, the symbolism is heavy in this story.  Gold for a king, frankincense for God, and myrrh for death and the subsequent Resurrection.

Still, what mother wants to deal with that?  Oh great, let me lug this stuff around while I ride a donkey.  You could have just paid for a room at the inn so we weren’t still hanging out in this stable 12 days later.  Of course, I may be a bit more practical than one that has just experienced a virgin birth and is by now quite accustomed to visits by angels.  A surprise visit in your recovery stable from some random foreign dignitaries must have seemed quite in the ordinary.

I’ve pasted the story from Matthew 2 below.

Albrecht Durer is one of my favorite artists, and is by far my favorite printmaker.  Since this blog is already long, I’ll save his story for another time.  I’m sure I’ll post a block print of his sometime soon.

I do want to mention the person that commissioned this painting.  Frederick the Wise, Elector of Saxony, commissioned the painting in 1504 for the church in Wittenberg.  You may think he or the church seem vaguely familiar.  He was an early ally of Martin Luther. The church at Wittenberg is the same church where Luther nailed the 95 theses, prompting the Protestant Reformation.  Frederick actually hid Martin Luther at Wartburg Castle to avoid arrest.

You can read a blog I wrote about another piece involving a dream Frederick III had about Martin Luther here.  Frederick III’s Dream

At first glance at this painting you may just see three Magi, but you’ll notice there are actually four.  Kneeling in front of the baby is Melchior, the oldest, traditionally aged 60, and representing Persia.  He presents gold.  Over his shoulder is Balthazar, representing Africa or Arabia.  He’s the youngest and is presenting the gift of myrrh.

And although it seems obvious that person next to him must be Caspar, I disagree.  Caspar is the Magi from India, or some even say China.  To me, the figure on the far right with his hand in his bag is more likely the third of the traditional Wise men.  His complexion, facial features, and attire show this man represents the East.

Then who is the long-haired man in the middle?  Albrecht Durer himself.  The artist created several self portraits, and there are just too many similarities to ignore. 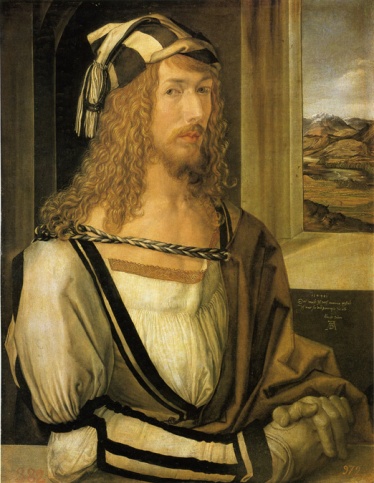 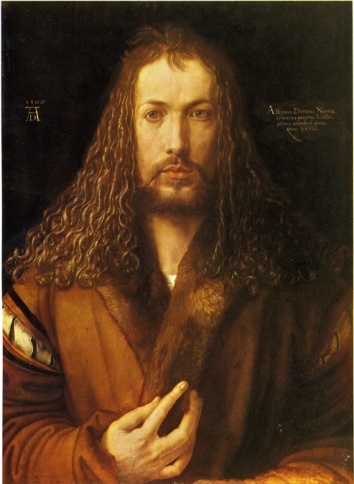 Now most scholars look at this painting and say the three men in the center are the Magi, including the obvious self-portrait.  The fourth man is always considered a servant.  But why would there be only a servant for Caspar and not the others?   And why is he presented in such an “ethnic” way?  No, I’m sticking to my claim that Durer represents someone else, possibly one of the 12 Magi, or maybe just himself.  There are so many different stories about these men, and practically every nation claims one of them represents their culture.  Some even believe one was from Tuscany.  I think he’s representing Europe.

I love the wonderful architecture in this painting.  There are arches connected to what seems to be a crumbling wall.  I especially like the roof over the cow and donkey that is attached to what seems to be part of an arch.  Notice that little detail near the top that looks like it’s some sort of pin keeping the curved  block attached.

And the animals, although we can’t see much of them, are marvelous.  Look at the expression on that donkey.  The fur on the face of the cow is so rich and varied.  I just want to reach in and pat him on the nose.

And of course, we can’t leave out my favorite part, the stag beetle.  On first glance, my thought was whoa, what happened to the proportions?  Then I remembered seeing another wonderful painting of Durer’s, one of this same beetle.  I can’t seem to come up with a good reason for this, but for some reason Christ was sometimes symbolized as a beetle during the 16th century.  Whatever the reason, it makes for an interesting and visually appealing part of the painting. 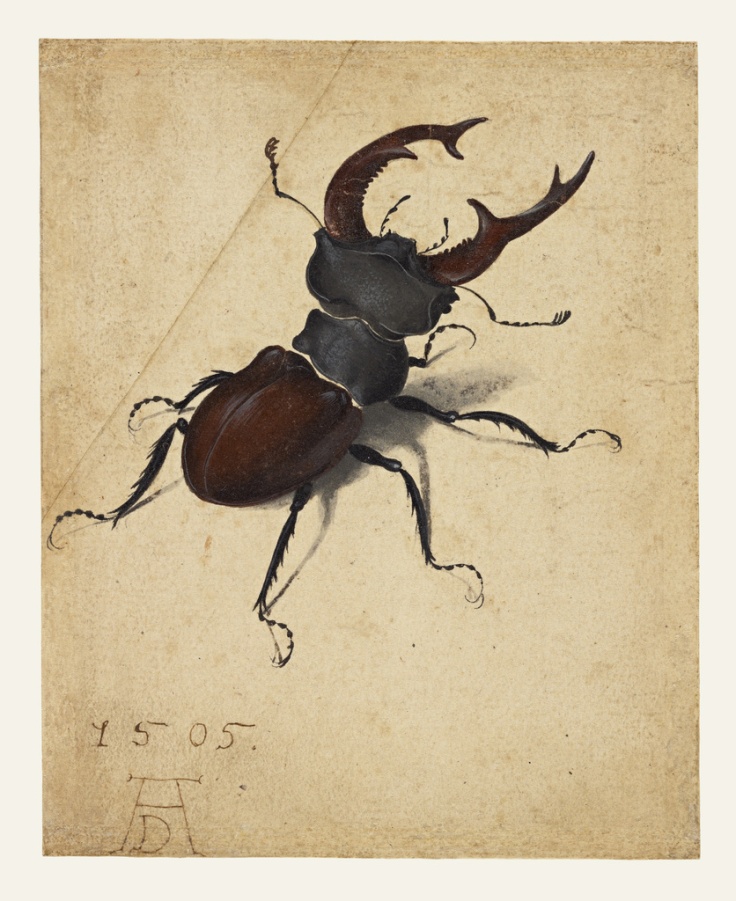 You can read a very insightful essay about this piece that I enjoyed here: Durer Magi

If you’re anything like me, the story of the Magi will continue to be an intriguing  story and mystery for years to come.  I hope you look up other versions of the story you know.

Here is the Biblical account of the story of the Magi as found in Matthew 2.  It is the only one of the Gospels to include the story:

The Magi Visit the Messiah

2 After Jesus was born in Bethlehem in Judea, during the time of King Herod, Magi[a] from the east came to Jerusalem 2 and asked, “Where is the one who has been born king of the Jews? We saw his star when it rose and have come to worship him.”

3 When King Herod heard this he was disturbed, and all Jerusalem with him. 4 When he had called together all the people’s chief priests and teachers of the law, he asked them where the Messiah was to be born.5 “In Bethlehem in Judea,” they replied, “for this is what the prophet has written:

6 “‘But you, Bethlehem, in the land of Judah,
are by no means least among the rulers of Judah;
for out of you will come a ruler
who will shepherd my people Israel.’[b]”

7 Then Herod called the Magi secretly and found out from them the exact time the star had appeared. 8 He sent them to Bethlehem and said, “Go and search carefully for the child. As soon as you find him, report to me, so that I too may go and worship him.”

9 After they had heard the king, they went on their way, and the star they had seen when it rose went ahead of them until it stopped over the place where the child was. 10 When they saw the star, they were overjoyed. 11 On coming to the house, they saw the child with his mother Mary, and they bowed down and worshiped him. Then they opened their treasures and presented him with gifts of gold, frankincense and myrrh.12 And having been warned in a dream not to go back to Herod, they returned to their country by another route.