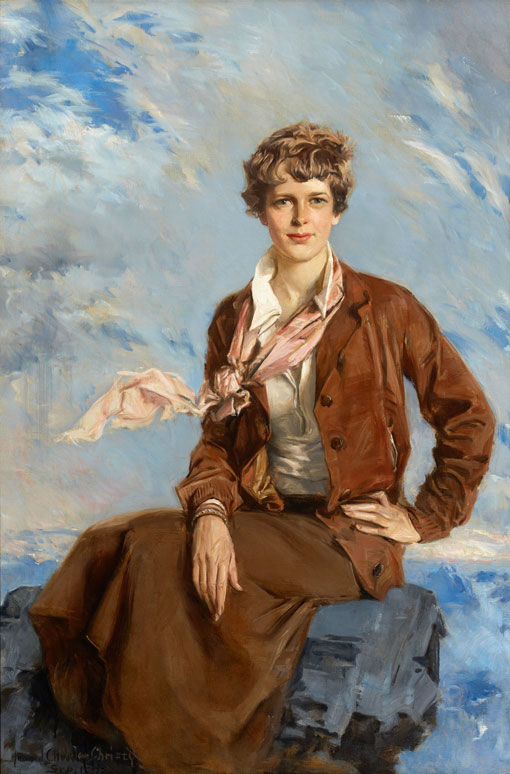 “We must be on you, but cannot see you – but gas is running low. Have been unable to reach you by radio. We are flying at 1,000 feet.”  This is one of a series of radio transmissions from Amelia Earhart to the Itasca, the Coast Guard cutter tasked with communicating with the famed aviatrix during her 1937 world flight on the Howland Island leg.  Although they were receiving her messages loud and clear, she could not hear their response, nor could she see the island.  That was 79 years ago today.

In 1923, the 26-year-old became the 16th woman in history to be issued a pilot’s license.  This after much hard work and determination.  She reportedly had to take the bus to the end of the line in Long Beach and then walk the remaining four miles to get to her flying lessons.

Arguably the most famous pilot in history,  Amelia Earhart has stood as a role model for generations. For girls and young woman she is seen as proof that we can all make our dreams come true.  In the field of aviation, her awards and honors are numerous.

Although some may find it controversial that I say this, I believe hers is also a cautionary tale.  She was one of the biggest celebrities of her time.  She had major endorsement contracts.  She was the most photographed woman in the United States.  And some would say her celebrity became more important than her aviation.

We may never know what happened that day as she and her navigator Fred Noonan seemingly blindly searched for their refueling station.  At this point, we still don’t know if they landed and perished on another island, ran out of fuel and crashed into the sea, were shot down by the Japanese, ran away together, or were abducted by aliens.  We may never know for certain.

But what we do know is that the radio equipment on the Lockheed Electra was new and unlike what she or Fred Noonan had used before.  We know neither were formally trained on how to use it.  We also know that the Itasca could hear them, but could not place them.  They were close, but were transmitting on the incorrect frequency.

It’s also widely accepted that Fred Noonan, an extremely accomplished navigator, was also an alcoholic.  Reportedly, he was sometimes incapacitated or at least not at his best.  Due to his accomplishments and expertise, he did not feel the need to learn to use the new equipment installed that would have helped them find Howland Island.

What’s my point?  Keep your eye on the prize.  This, of course, is merely my opinion.  But it seems that maybe the focus was no longer on being the best aviator and navigator, but being the most famous.  And who knows, maybe that was just the pressure surrounding a superstar, but certainly there was some human error involved.  If nothing else, the fame and hoopla surrounding the flight led to poor preparation.

Maybe I’m wrong.  Maybe someday we’ll learn there was a malfunction with the equipment or there was a problem on the Itasca.  But maybe I’m right.

Howard Chandler Christy was an American artist that initially gained fame as a combat artist.  He illustrated several  posters for the Navy and Marines, which led to illustrating magazine covers.  His most famous work is Scene at the Signing of the Constitution of the United States, which hangs in the Capitol building.

I love how strikingly confident Amelia Earhart appears in this painting.  She wears a slight smile that could almost be characterized as a knowing smirk.  She’s the best there is and she knows it.  It’s not a look of braggadocio or pretentiousness, but a look of accomplishment.

I love the colors in this painting.  Of course, this was the jacket and attire she was known for, but the artist captures the folds and highlights.  Her pink scarf floats in the wind without looking romantic, and her hair looks perfectly out-of-place.

What a senseless loss of two amazing talents.  Maybe some day the mystery will be solved.  But sometimes solving the mystery doesn’t make the story happier.  I choose to remember Amelia Earhart as an extraordinary woman, pilot, and activist.

Learn more about the search for clues here:  TIGHAR