On this day in 1999, two troubled high school students terrorized their school and changed the way Americans would perceive everything from bullying, gun laws, mental health, and school safety forever.  Fifteen people, including twelve students, one teacher, and the two shooters died. An additional 24 people were injured.

Eric Harris and Dylan Klebold planned and perpetrated one of the most deadly school shootings in American history.  When their original plan to bomb the cafeteria failed, they began shooting.  Although according to their journals the plan was to kill  hundreds of people with bombs and explosives and then escape, both would take their own lives before they could be taken by police.

Although 17 years have passed, school shootings continue in this country.  Children are still bullied every day.  Guns are still readily available.  The internet is full of young people screaming for attention.  Mental health is still scoffed at in favor of mass incarceration.  People still suffer.

I combed through hundreds of photos for a suitable painting to stand as a memorial for those lost at Columbine.  However, I found an alarming amount of fan art from “Columbiners” who seek to idolize the shooters.  I found a couple interesting pieces, but nothing that seemed appropriate.

Instead, I opted for this watercolor of a columbine flower by Dawn Derman.  It’s simple in color palette, but I find the composition intriguing.  Maybe I’m influenced by the subject matter, but I see something extra in this little painting. 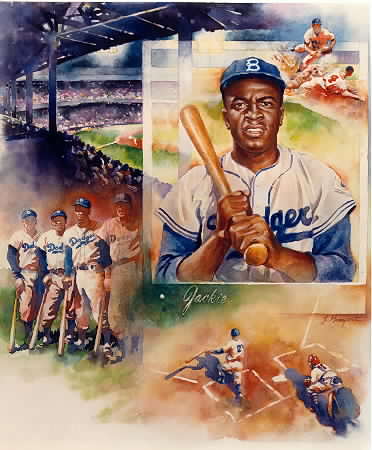 On this day in 1947, Jackie Robinson broke the color barrier of Major League Baseball and became the first African American to start a game outside of the Negro League.  After starting the game at first base for the Dodgers he ended the year by being awarded the very first Rookie of the Year.  He would go on to become a six-time All-Star, MVP, and play in six World Series championships.  He was inducted into the Hall of Fame in 1962, the first time he was on the ballot.

Even more interesting to me is his military career.  He was drafted in 1942 and assigned to a segregated Army cavalry unit.  He faced discrimination when applying to the Officer Candidate School, but was eventually accepted with some help from Heavyweight Champion and friend Joe Louis.  He was commissioned as a second lieutenant and joined the prestigious, though segregated, 761st “Black Panthers” Tank Battalion.

His commanding officer refused to authorize legal action so he was quickly transferred to another battalion with a commander that would.  The Black Panthers Tank Battalion went on to be the first black tank unit in World War II and obtained high honors without him.  Eventually the charges were reduced and he was acquitted by an all-white panel.  I guess this prepared him for what he was up against while facing racism in Major League Baseball.

The artist is John Gampert, an American illustrator.  He’s best known for his paperback book covers, including many, many Star Wars books.  Although it is sometimes listed as an acrylic painting, it seems to  obviously be watercolor.  Since he was an illustrator I suppose it could be acrylic ink, but I can’t seem to find much definitive information.   You can also find this painting sometimes cropped to just show Robinson’s portrait.  I like the whole painting so you can see a little of Ebbets Field and some of his teammates.

UPDATE:  I have verification from the artist’s son Erik that this IS acrylic.  Thanks for the information, Erik!  If you would like to order a copy of the print, you can do so here:  John Gampert

On April 12, 1961, Yuri Gagarin became the first human to travel to space.  At just 27 years old, the Soviet Cosmonaut was launched from the Baikonour Cosmodrome in the Vostok I.  Although an accomplished pilot, the space capsule was designed to fly completely on automatic control or ground control due to the lack of information on how a human would react to weightlessness.  He was to switch to manual control only in case of emergency.

The journey to orbit the Earth one time was only 108 minutes long, but it launched Yuri Gagarin to superstardom.  The handsome pilot was immediately a hero and heartthrob to millions.  Tragically, the young pilot would die only a few years later at age 34 during a routine training mission.  He traveled to space only one time.

Mykhaylo Khmelko was a Kiev born oil painter known for his Socialist Realism paintings.  He’s sometimes criticized for “exploiting” Nationalist sentiment by painting large works depicting important moments in Soviet history and is often considered a “party painter” because of the number of official commissions he obtained, which eventually led to being awarded two Stalin Prizes.

I tend to just look at him as a historical or current events painter.  For the most part, he accurately portrays the events and depicts the feeling of the country at the time.  What I particularly like about this painting is the smile on Gagarin’s face and the sheer number of people in the crowd, all with excited expressions.

After the flight, many people around the world at the time felt a sense of disappointment.  Of course, some were disappointed the Russians had excelled in the space race and were concerned for the future.  Others, however, felt more disappointed in the reaction by the US and the West over the great accomplishment.  This was a time to celebrate humankind and the advancement of all people.  It could have been seen as a symbol to rally around, a step toward peace.  Unfortunately, it just added fuel to the Cold War fire.

Today, we remember Yuri Gagarin and all those men and woman of all nationalities who have helped our little planet reach beyond our atmosphere and into space.  History shows that it takes everyone working together to accomplish the great feat of space travel.  Just take a look at the INTERNATIONAL Space Station.  Happy Yuri Gagarin Day!

I love Clydesdales, even though I have no great affinity for horses.  My love, of course, comes from the Budweiser Clydesdales.  Growing up in the St. Louis Metro East, I can’t imagine a kid NOT loving them.  Here they’re a symbol of so many things–the start of baseball season, a trip to Grant’s Farm, a brewery tour, regional representation during the Super Bowl (the only way we even have a chance of it now), strength and honor, community pride.

This is a great little oil painting by Suzy Schaefer, a contemporary California artist.  I’m not sure if she has any connection with the area or the Anheuser-Busch traditions, but she certainly nails the look in this painting of a team of Clydesdales pulling the red Budweiser beer wagon.  The handlers are wearing their traditional green suits and Clyde sits beside them.

There’s nice movement in this work as well.  The distinctive feathering on their lower legs and fetlocks seem to blow in the draft of their trot.  Their heads tilt as in concentration.  Even the abstract trees in the background give a sense of a gentle breeze.

I always loved this oil painting by Claude Lorrain.  It depicts the court of the Queen of Sheba preparing for her journey to meet King Solomon.  Her story is widely told in many cultures and religions, including both the Old Testament and Quran, but also in Ethiopian and Coptic lore as well.

It’s said she met King Solomon and asked him riddles.  After he was able to answer them and she was satisfied with his intelligence she gave him many gifts, including a great amount of spice.  Some believe she was summoned to the king to be his concubine.  Some say she was a jinn, half human, half demon.  Many believe they were in love, and still others say it was just a torrid love affair.  Really, I tend to believe she was trading with him, not just showering him with gifts.  But as with any good legend, it’s hard to know what truly happened.  Also, I don’t think it really matters.  Well, at least not in this painting.

I first saw this painting at the National Gallery in London and had no idea what it was about.  After all, these buildings are obviously not from 500 BC.  I’ve often wondered if he painted this, then needed to give it a biblical background so he found a story that would work for him.  Landscapes were not popular in the middle of the 17th century and were generally considered not very sophisticated.  Perhaps he needed a back story to lend some credence to his work.  Or who knows, maybe the Queen of Sheba was his intention all along.

What struck me was the reflection of the sun on the water.  It leads your eye straight from the middle of the painting down to the forefront where the men are packing the small boat, which leads you straight up to each of the buildings.  Then you think, oh, I should have noticed those wonderful buildings before.  Or at least that’s what I think.

I think this painting gives the impression of a new day dawning, a new journey beginning, a new hope for the future.  So it seems somewhat fitting that I should use this painting to launch this new blog.  I’m certainly embarking on something new myself, a whole new life.

You may note the name of the blog is reboArts.  That was Kip’s dream company.  Unfortunately, I am not a coder (nor have any intention to be), so no more web hosting.  The name, however, will not be completely lost.  I will do my best to keep reboArts alive instead by bringing wonderful works of art to those who may not have a chance to experience it in person.  I think he would approve.